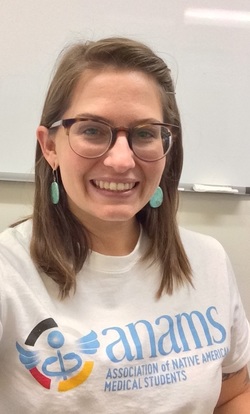 Carolyn Kraus is a medical student in the UC Berkeley-UCSF Joint Medical Program. When she graduates, she plans to work as a primary care physician and clinical researcher in partnership with Native American communities in California. She currently is completing a longitudinal analysis on the effectiveness of the Gathering of Native Americans (GONA) health promotion curriculum with American Indian adolescents in California. The GONA intervention was designed by Native American social workers and mental health care providers at the Substance Abuse and Mental Health Services Administration (SAMHSA) to build self-efficacy, prevent suicide as well as substance abuse, and cultural awareness in indigenous communities. The GONA focuses on four major themes: belonging, interdependence, generosity, and mastery.

Carolyn is a mixed heritage Anishinaabekwe (Sault Ste. Marie Ojibwe) who grew up in Honolulu, Hawaii and rural Michigan. She moved to California in 2003 to attend Mills College, where she studied Ethnic Studies. After graduating from Mills College in 2008, Carolyn became the Assistant Director of Native American AIDS Project in San Francisco and later served on the Board of Directors. In 2013 and 2014 Carolyn continued her work in healthcare as the Program Coordinator for the Women’s HIV Program at UCSF, where she honed her grant writing skills and developed an interest in research related to trauma in communities of color. She is committed to transformative social justice work including racial justice, indigenous liberation, and health/healing justice.